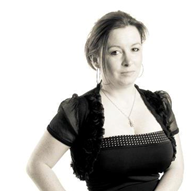 Born in Oman, Charlotte moved to the UK in 1989.  After moving around the country, she settled in Somerset in 2008, where she now lives with her husband, two children and growing menagerie of pets.

Mandy: Hi Charlotte.  It is an honor that you should agree to this interview.  Many of us in the writing communities know you.  However, for the prospective readers who would like to know the author behind the newly-released book 'Seven Dirty Words', who would say Charlotte is?

Charlotte:  My name is Charlotte Howard and I am a wife and mother who happened to write a book called SEVEN DIRTY WORDS!

M: Writing a book is a big task, and having completed it is quite a reward in itself.  How did you begin writing? I mean, when did you realize you could write, or what was it that made you turn to writing on a serious level?

C:  My first piece of poetry was published in an anthology when I was 14, which gave me the confidence to keep writing.  In 2008 I came across a website that paid writers, and I began working there, writing pet care articles.  Eventually I got the confidence to try my hand at novel-writing.

M: Congratulations on the release of your book 'Seven Dirty Words'.  I was so thrilled when I read the announcements of your book; a feeling of pride as in "I know this author. She's my friend. And she was in Oman!!!! "  LOL.  But... tell us about your book, what is the back-cover version of your book?

C: Paige Holmes hides herself in a masculine world in a desperate attempt to remain safe. Just as she is ready to face her fears and her past, she finds herself torn between Matt Jackson and Vance Ellery: handsome, rich, and safe – or handsome, rich, and dangerous? Which will she choose? The one who appears to be the most perfect, or the one who makes her use all Seven Dirty Words?

M: What makes this book special to you?

M:  How is this book different from other books in this genre?

C: The main character, Paige, isn’t sweet, innocent and naive.  She’s been through a traumatic experience, and rather than let it destroy her, she’s working hard to keep it in her past.  She isn’t stunningly beautiful either.  She’s very average, with scars across her eyebrow and jawline and a previously broken nose – the traits any girl who plays rugby, rides horses and fights has! 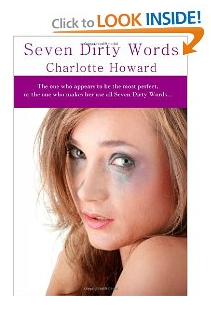 M: What is the scope of this book?

C: Seven Dirty Words is a contemporary romance that is centred around Paige Holmes, a young woman, trying to overcome a traumatic time.  She meets two men: Vance Ellery, who she nicknames TDS (Tall, Dark, and Smouldering) and Matt Jackson.  TDS is a lot older than she is, and dangerous.  Matt Jackson is her own age, and safe.  The story is about her overcoming conflict, and having to make the choice between the two men.

M: To begin with a novel, there must have been some idea or motivation behind it. Why was this book started?  Should credit be given to others too?

C: I read Fifty Shades and wondered if I could write a romance novel.  I’ve always been interested in crime, so never considered writing one before.  21 days later, I had a 90,000 word manuscript sat on my PC!  Credit definitely has to go to Robin Tidwell of Rocking Horse Publishing for taking on my little story and putting it into print for me.  And of course, thanks to the editors, cover designers, proof-readers and everyone else who has helped along the way.

M: Wow!  90,000 words in three weeks.  That tells us something about your writing habit.  Normally, how many hours in the week do you set aside for writing?

C: I figured this out the other day – 40 to 50 hours a week when the kids are at school, around 20 hours a week during the holidays!

M: Behind every successful writer is...

C: ... a strong support network of friends and a husband who are willing to listen to you bounce ideas off, and make you a cup of tea every time you get rejected.

M: Who do you think should buy your book?

C: It is aimed at women aged between 25 and 35, although I know women who are older have read it and enjoyed it.  People who have read the Fifty Shades or CrossFire novels will enjoy it as well.

M: What advice would you give aspiring authors?

C: Keep writing, even if you think it’s rubbish – you can always edit later.  And join your local creative writers group.  My writing has improved greatly since I joined mine!

M: Are you working on anything now. What's in the future?

C: I’m always working on something!  I’m currently writing FOUR LETTER WORDS – the sequel to SEVEN DIRTY WORDS, but also plan on editing a previous novel, and have made a start on a new one entitled ‘Her Idol’.

M: Thank you Charlotte, for your time and patience with this interview. Together with all our readers, Mandy's Pages wishes you success and fame with your book 'Seven Dirty Words' and looks forward to the completion of all your other writing projects. All the best!!!

Seven Dirty Words is available at

Meet Charlotte at her direct links: