Getting to the Heart of Tanka - 2 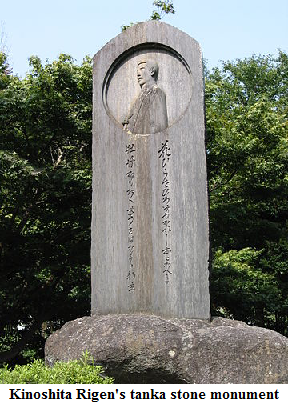 I have some specific comments about your introduction:

"It is also full of strong imagery which consists of two parts.  As a rule, the first consists of three lines and makes up the first part of the imagery or theme."

What you're describing is a common structure in tanka, but by no means required. Some tanka are a 'rush of five lines down' and don't break into parts, some have two, or three, or four, or five parts. When they have two parts the break might come at the end of L2 - or L1, or L4! Many poets who come to tanka from haiku assume that a tanka is a 'haiku +2', but that's

This coalesced into the common Man'yo period form of 5-7, 5-7-7. The 5-7-7 was a pre-existing format called the 'katauta' that was dying out by the Man'yo period. The 5-7-7 could be preceded by any number of 5-7 couplets creating a long poem called a ‘choka’.

As we can see, a tanka is therefore the shortest possible choka.

There are a number of choka in the Man'yoshu, but the form fell into disuse - waka became so popular it almost eliminated all other forms.

By the time of the Kokinwakashu, 5-7, 5-7-7 and 5-7-5, 7-7 forms were popular and in common use. The great majority of tanka fell into these two forms, but others were still written and published.

The Kokinwakashu deliberately switches among them - if you stick to one format for an entire book it becomes a sing-song that grates on the nerves. Variety in form is essential to making a long work readable. For this reason I oppose the adoption of the s-l-s-l-l schemata as a requirement for tanka in English.

It creates a sing-song rhythm that the Japanese love, but which in English is used for nursery rhymes. A lifetime of living in our culture cannot eliminate our subconscious assumption that sing-song sounding poems are not adult literature. Plus an entire book of such will drive you up the wall. (I had to review a book with ~400 such poems. Halfway through, you hate it regardless of the literary merit.)

The earliest successful adaptor of tanka into English was Jun Fujita, a Japanese-born poet who published a collection, Tanka : Poems in Exile in 1923. He departed from the work of the early generation, eg, Sadakichi Hartmann, whose Drifting Flowers of the Seas (1904) contains tanka in which he adopts rhyme and meter.  Hartmann's  poems sound very pretty, but they are vapid. Fujita criticized those who count syllables as adopting the 'carcass' but not the 'essence' of Japanese poetry.

It must be kept in mind that tanka is not just a form, it's a genre. Compare it to the limerick. Yes, the limerick is the form existing in English that most closely resembles the tanka form: five lines, three of which are long, and two of which are short, in which rhythm is very important. Yet look at the content! The two are completely different.

In Japanese, the sort of content we put into a limerick is put into a kyoka - a poem that has exactly the same format as the tanka, but which is very different. Not much kyoka is written in English, but there is one journal devoted to it: Prune Juice (free online).

You also mention 'gogyohka.' This word is trademarked in Japan by Enta Kusakabe, the inventor of the form. I suggest adopting the public domain term 'gogyoshi.' Gogyoshi strongly resembles tanka in English because it abandons syllable counting.

Many of the gogyoshi poets working in English want to do their own thing and feel that tanka is too stuffy, but I have noticed that few of them are rising to the level of literary merit. For a while, tanka poets experimented with gogyoshi, but have mostly returned to tanka. I think they realized that they can in fact do anything in tanka that they could do in gogyoshi; the liberation has happened in the mind of the poet because the freedom already existed in the form.

Articles available at AtlasPoetica.org
Other articles
(I suggest 'Everything Is Tanka' for the person who wants to learn how to write tanka. Everything else is at a more advanced level.)
Image Credit: Kinoshita Rigen's Tanka Stone Monument by Reggaeman at Wikimedia Commons