Getting to the Heart of Tanka - 3 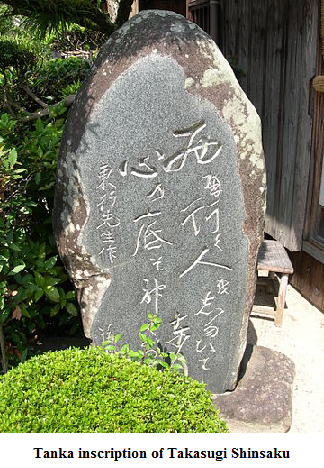 It is common for haiku poets to claim that haiku are objective and tanka are subjective, but this is a mistake. Back in the medieval period in Japan, scholars and critics argued the difference between 'wet' (emotional, subjective) and 'dry' (objective) as the desired basis for tanka. Usually the advocates of wet tanka won, but not always, and the dry advocates did edit at least one of the Imperial anthologies. A substantial minority literature in the dry style developed.

Then Shiki and the other reformers of the late 19th and early 20th centuries introduced 'shasei' ('sketch from life') to tanka. Shasei was adopted first in Japanese art in imitation of Western art, and from there it was introduced to tanka. Thus modern tanka are a fusion of East and West. The sketch from life tanka can be extremely dry, or as haiku poets would say, objective, but of course there is no such thing as an objective poem. All poems reflect the minds and hearts of the poet who composed them, and they elicit reactions in the minds and hearts of those who read them. If they don't, they aren't poetry. ( I wrote about this in 'Wet and Dry : Lucille Nixon, Georgia O’Keefe, and Masaoka Shiki on Shasei' which appears in ATPO 14.)

Unfortunately, because haiku is better known in the West, people often try to explain tanka as marginalia to haiku, but this is a mistake. It is haiku that derived from tanka, not the other way around. Tanka is older and has a complex history of spinning off many variants and spawning entirely new forms, of which haiku is just one.

Tanka has a rich written literature that in its earliest incarnations in the 8th century preserves some of the relics of the oral period before the Japanese had a writing system. Tanka has many possible aesthetics and continues to introduce new possibilities. The modern tanka of the post-Meiji reform is very different from the classical waka that preceded it.

The best way to learn about tanka is to read good tanka. Take Five : Best Contemporary Tanka, Volumes 1–4, is a good place to start. Likewise, joining a tanka society such as Tanka Canada, The Tanka Society of America, or the Anglo Japanese Tanka Society (UK), is also helpful for the novice poet who wants to learn about writing tanka.

Articles available at AtlasPoetica.org
Other articles
(I suggest 'Everything Is Tanka' for the person who wants to learn how to write tanka. Everything else is at a more advanced level.)
Image Credit: Tanka inscription of Takasugi Shinsaku by Ogiyoshisan at Wikimedia Commons