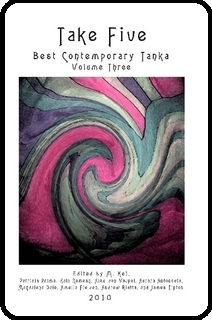 Short review: Artistic expression of elegiac human emotions through tanka prose and poetry.  Connect with tanka as the poets gracefully touch on the  sting of grief and loss.

Take Five: Best Contemporary Tanka, Volume 3 (2011) is the sequel to Volumes 1 and 2 and precedes Volume 4.

This volume includes approximately 300 tanka expertly selected from 18,000 submissions and 175 venues. M. Kei is the editor-in-chief of this volume. The team consists of nine editors.

Although most of the Take Five volumes contain tanka on love and life, this volume is characterized by the touch of elegiac verses.  There are many tanka that are mournful in tone and related to illness, death or to life beyond.

balances on one hand

Notice how so much emotion is expressed in five lines; the story of loss in a handful of words. The poet cleverly uses the devices of tanka to not only express the mournful state of the processions, but to also indicate the funeral was that of a little child; so light, that the old man could carry the tiny coffin with one hand.

Poet John Soules goes even further with his poem.  He aims at finding comfort and closure through his tanka ...

I set you free to visit

you never had the chance to

before you had wings

Was there disappointment on the part of the poet?  Was there a sense of achievement? This tanka challenges the reader to interpret it in any way he may choose to do so, with enough dreaming room. What are the thoughts that cross your mind when you read this tanka? Do you see it from the protagonists' point of view of from the poet’s? Or, do you read it as a distant observer?

Moving on through this volume, you will come across tanka that have a touch of humor to them. I personally loved Alexis Rotella's tanka -

has a lot to say

Then there is also the tanka by André Surridge, which evokes an immediate response: “The message of non-violence gone down the grave”, through his verse

where Gandhi was cremated

The third volume of the 'Take Five: Best Contemporary Tanka' series will not disappoint you.  There is a tanka for almost every mood: from life to death, love to disappointment, and from humor and irony to plain reality.  In addition, a tenth of the volume consists of translations from languages such as Romanian, Spanish and Russian.  45% of the selected entries are from previously unpublished poets. Quite a lot of submissions have been through Twitter; much more than that collected for the other Take Five volumes respectively.

However, more than anything else, find expression for your thoughts and unspoken words through the tanka in this brilliant collection.  They have the power to speak to your inner you.

putting the clocks ahead

is so much worse

and every hour is precious

Book Reviews in This Series