Feminism: Being Politically Correct or Being Human? 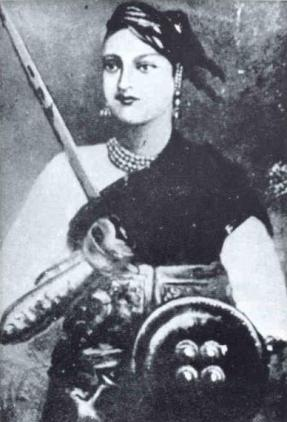 What is the first thought that comes to mind when you think of the word feminism? To me, feminism is “Womanhood” and pride in being a woman. I am proud to be a woman. You may also consider me a Modern Day Feminist... and to be more specific, a Modern Day Christian Feminist based on Proverbs 31.   I do not need to be an activist in a women’s lib group or a women’s emancipation group or whatever other name it may go by. Neither is it relevant to know whether I am a member of the Feminist Movement. To me feminism is an indication of who I am and my belief that I am worthy of respect, love and recognition. I do not have to be a liberal or conservative female to be a feminist.  I just have to believe in myself and believe I can outline “my” story for “my” life with equal opportunities as men to education, employment and a life free of abuse within my marriage. I have zero tolerance for bullies, abusers and men who have no respect for women.

Appallingly, there are men all over the place who are intimidated and threatened when they find women who do not do as they wish.  Such men, known as cowards, constantly terrorize homes, neighborhoods, cultures and now the internet, with their shameful display of character as they demean women in every way possible.  Like any group, sect, religious order or community, you get varying levels of feminists.  Some may be the orthodox type, very religious and yet with a determination to portray their individuality and identities, and the extremes or fanatics who believe their debatable display of fashionable trends or their total lack of reliance on men are the means to expression. Yet, each of us has our right to personal expression. Remember, the feminist ideologies began because of oppression against women, so nothing comes from nowhere. 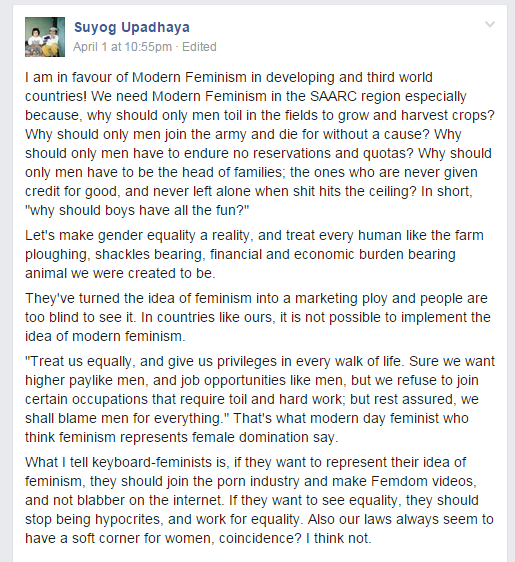 Look at the fields in India - pregnant women, women with nursing babies, malnutritioned women .... all work in the fields. Do you go through pregnancy and labor pains? We do not ask you to. And we don't want you to, or you would be whining even more like the spoiled child that you are with your rash remarks on this topic. I personally take offence to the contents of your post. You talk about being politically correct. I talk about being human. Just because I am a female, doesn't mean I am not human or that I have to be inferior to you. Nor is my worth less than yours. We cook. We clean. We keep our home intact, we step outdoors to work from morning to night to support our husbands in running the family and bringing food on the table, we take all the trash from in-laws in joint families under the excuse of 'holiness in the sacrament of marriage' and we're not to complain about it. Most Indian women are at the mercy of the menfolk in the family from childhood and after getting married, and should we choose to voice our opinions, it's considered sacrilege not only by the respective families but also by the entire community.

Considering the amount of rape cases that are taking place, it can be assumed that a vast majority of men view each of us women only as sex objects, constantly wanting to touch us, fondle us, manhandle us, terrorize us and also victimize us for life, so to speak. I may be on the safer side of the fence, considering I have the opportunity to speak out, but what of the poor, unfortunate, hapless, and scared-to-death women who suffer in silence?  Who speaks up for them?  Whom do they have to tell their stories?  Suyog? You can bet your sorry hide the kind of story he will share.  To him women are just porn objects for his pleasure.  In addition, this man is allowed to work and earn as a respectable citizen in India / Nepal while many women suffer and slog to be recognized.  Whether he agrees to or not, his vulgar mouth has raped each of us off our dignity, self-respect and individuality. He has raped us with his wicked and foul approach.  Men like him rape us each time they are allowed to open their mouths to speak.

I do not need to give you a profile summary of Suyog.  He goes by the identity suyog_vicious on twitter.  You can see for yourself the type of personality he portrays. But then, should he choose to delete his profile now, here’s a snapshot of his page. 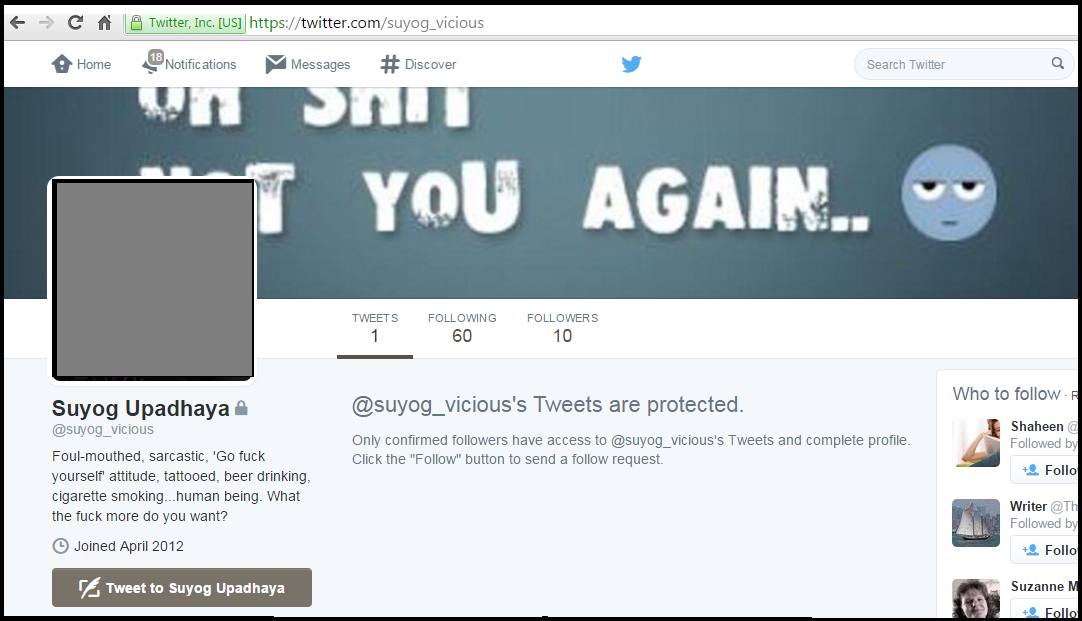 When I worked as an independent franchisee for Reliance Retail in India, and was the only female amongst 25+ male store managers in the state of Kerala, I did not have an easy time.  There was severe competition no doubt, but what was worst, was the attitude the men had towards me, including the Cluster Manager and Franchisee Development Manager (FDM).  When I raised issues about my staff to my FDM, his response was ‘If you want to bloody work then bloody work.  Or sit at home.”  (I was not an employee of the company for him to even address me thus.)  And the Cluster Manager always kept addressing me as “sweetheart” each time I attended the meetings at the Regional Office.  I reported them both to the CEO and there was a whole series of inquiry and retaliation.  Finally, the Cluster Manager chose to pick on my character as his last effort to get even, claiming I was being indecent at the store and with the other store managers.  Needless to say, after my fight back, both of them, the FDM and CM, were reshuffled and demoted and with the warning that they would lose their jobs next.

My grandmother was a feminist in the true sense of the word.  She didn’t have to be part of any organization, and she didn’t have to do any extraordinary things to be recognized.  Truth was she was an extraordinary lady to begin with.  Born in 1925, and an orphan at a young age, she brought up her two younger sisters.  When women were denied education, and in a community in India that didn’t favor educating girls at that time, she went on to earn three Bachelors and three Masters degrees.  She was the earning member of the family most of her marriage and grandpa was usually on the sidelines.  I believe he was just as extraordinary as he allowed her to shine, so to speak.  She did what she wanted, and he stood by her. If she wanted to rush off somewhere for an exam, he would accompany her.  If she found better job placements in a distant place, he’d pack things up immediately to set off with her.  Mind you, all this in India.  When men chose to ogle at women indecently, she was unconcerned.  She would dress the way she wanted, believing in herself, and would be ever ready to take on her tasks for the day, until the day she went to the hospital where she died at the age of 79. The best part about her was that she centered her life on doing the will of God. I’d like to think of her as a Proverbs 31 woman.

On the other hand, I have my issues with film actresses, singers and models who reveal too much with little to no clothing.  But are they the only feminists around?  The majority of feminists are those that work behind the scenes, fighting for equality, and for women who are oppressed, jobless or those forced to lives of abuse within their marriages.  If this isn’t feminism, then what is?

Here’s what Suyog has to say additionally … "Hold your horses, lady. No one forces you to cook or wash, it is your choice. My mom has been a single parent for over 22 years, so pray don't tell me about roles and responsibilities of being a woman. My question is, when women such as yourself ask for equality, where does the equality go when they have to walk the talk? They want to be treated fair but want to portray themselves as soft vulnerable creatures who have been forever harmed.

Weakness and timidity?  Here’s news for you Suyog. Don’t mistake my kindness for weakness. Apparently, you spoke to the wrong person the day you decided to open your vulgar mouth.

Suyog, every word you’ve spoken shows how vulgar and petty your mind is and heart too, for out of the abundance of the heart speaks the mouth. You don't need to go out on the streets to rape women. You've already raped us off our respect and worth and dignity by your very words. Thank you very much, but no thanks. I wish you the best in life.

Rani Laxmibai of Jhansi, Wikimedia Commons : (Portrait of Lakshmibai, the Ranee of Jhansi, (1850s or 1860s). Probably done after her death (June 1858): she wears a valuable pearl necklace and a cavalrywoman's uniform)