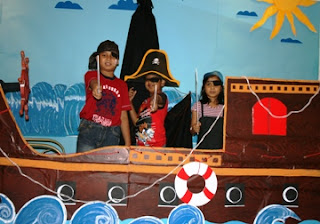 Children love birthday parties planned along the lines of a theme or their superheroes. One common popular theme is ‘Pirates’. Those who are planning and hosting such a birthday party can be immensely creative with their ideas, games and fun activities. 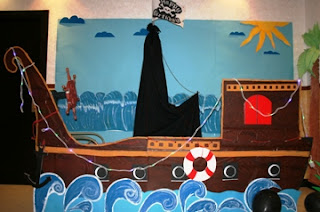 To begin with, the pirate setting requires a boat. It could either be drawn and painted as a backdrop, or it could be made into a two dimensional boat as the main prop to enhance the effect of the theme. In this case, the structure of the boat was created so as to give the effect of a boat / ship in which the captain and crew could stand behind.

In order to build the ship, common material like sheets of styrofoam, fevicol, wire, chart paper, and crepe paper were used. Since the ship that was built was over eight feet long, it was created in two halves and then joined together at the time of assembling.

Accessories for the boat 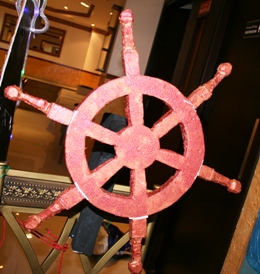 There are many accessories that could be added to the boat. Remember, since it is a kid’s birthday; try not to be too realistic but more imaginative and animated in your presentation. Items such as an anchor, stirring wheel and life buoy could be made out of thermocol or styrofoam. These two materials are commonly used for insulation and as packaging material as they are shock absorbers for wear and tear of items and are likewise easy to fashion for craft activities. The boat also requires a sail that could be made out of a pole and a table cloth or shawl. Use rope to tie the sails on the pole, and also for attaching the anchor and life-buoy to the boat. Additional rope can be loosely woven around the railings of the boat. Cut-outs of waves may be placed at the base of the boat to give the effect of the boat in water.

The backdrop or the picture behind the boat adds to the effect of the scene. The most natural setting would be that of a blue sky, clouds, sun, water and waves. The boat could either be docked by the port or out at sea. So accordingly plan your backdrop picture. In the current example, the picture was created out of nine sheets of light blue chart paper joined together to depict the sky and sea. On it, patches of blue clouds, a sun and the painting of waves were glued to it. All these objects were removable so that the entire roll of blue chart paper was removable.

No pirate scene is complete without a treasure chest. This treasure chest is a simple box that can be made out of styrofoam or cardboard. Decorate it in such a way that it looks like a chest full of loot and treasures. 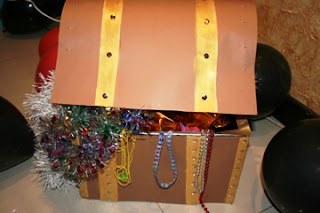 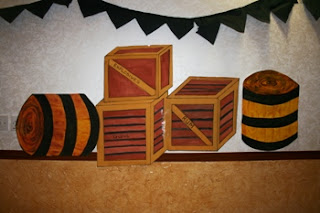 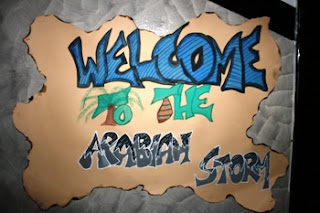 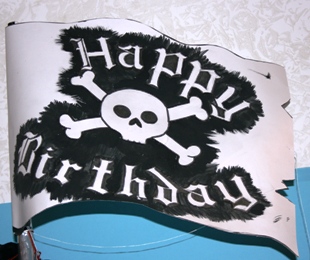 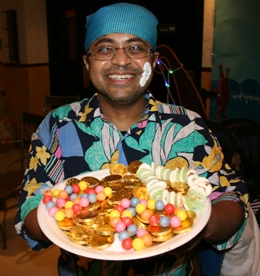 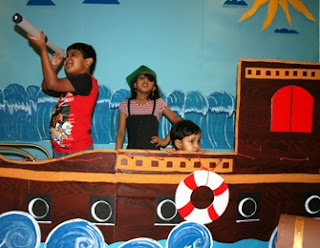 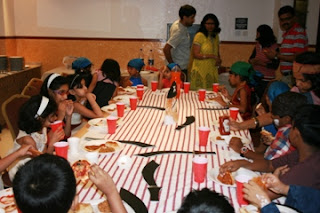 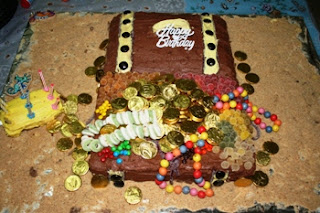 The birthday cake may be made in the image of a treasure box, or a pirate ship. Make sure to add the necessary decorations. 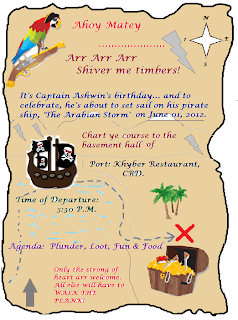 The invitation card may be simple to creative based on the level of creativity of the person making the card. While cards may be available at select stores, one may also print them at home based on pirate-themed ideas. The attached image is that of an invitation card created by the organizers of the nine-year old boy’s birthday party.

Kiddy birthday parties consist of games and activities that keep the kids occupied from beginning to end. Organize a pirate dance around the room to the music of pirate songs. Games such as pinning the parrot, treasure hunt and bombing the port are common games that may be played. Boxes of goodies wrapped in gold paper to depict treasures or gold bars may be handed out as prizes.

Should it be a family party where adults too are present, games like ‘walk the plank’ and ‘fire the canon’ may be organized.

To conclude the event, hand out photographs to the guests to create a memorable and lasting impression of the birthday party. Photographs may be edited to include details such as names and date. 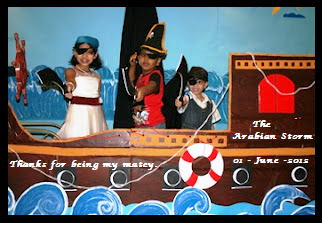