In the Spotlight with Vago Damitio 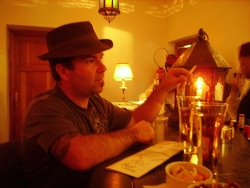 Recently I had the opportunity to talk to Vago Damitio, author of Rough Living: Tips and Tales of a Vagabond." Vago writes from his personal experience living life on the rough side.

Vago, give our readers a picture of who you are.
I was never entirely happy with the idea of spending the limited number of years we get to live doing the work of someone else. It always seemed like we were meant for more than just being wage slaves to some greedy capitalist. I managed to convince myself that society was going to crumble by the time I reached manhood, but after spending my youth prepping, training in the Marines and then eagerly waiting for Y2K to hit, I realized it just wasn't going to happen and that if I wanted to enjoy my life, I needed to just go out and do it.

The big impediment seemed to be money, so I decided to write a book about how to live without money. Since that time, I've pretty much done things my own way. I've traveled to somewhere around 50 countries, nearly all the US states, found the girl of my dreams in Morocco and married her, became a dad, and have managed to do it all without being a slave to anyone.

An interesting way to go about living the dream. How did you get started writing?
I can't remember not writing. When I was a kid I would write books with pictures. As I got older, I began to keep journals. My friends in grade-school thought I was crazy for always writing too much and as I got older and was able to pick, I usually took writing intensive courses. This in addition to keeping journals, writing stories, and then later, writing for newspapers and magazines.

Just about every author I talk to tells me they began writing very young. I think it's in the genes. So now your book, Rough Living, it is about...
The world isn't going to end, but your job might. That was what went through my head as I looked around after yet another end of the world scenario had failed to play out. What I realized was that the worst case scenario was being stuck in a society that makes cash a necessity without having a dime.

My solution was to spend the next year living without a job, without a house, and often, without a dime. From the beginning, my intent was to share what I learned with the world. The result was Rough Living: Tips and Tales of a Vagabond.

Rough Living is a book in two parts. The first part is a guide to living the down and out life, off the grid, without a dime. The second part is filled with stories from my year long experiment. The tales begin with my adventures hobnobbing with tramps, hobos, and bums ,but then I took a serious left turn when I ended up going to China, Laos, Thailand, and Indonesia.

At the end of the year, I found myself living fifty feet from Waikiki beach in Hawaii and enjoying life in ways that I never would have imagined when the adventure began. The rewards of rough living, I like to say.

Part of what makes this book so interesting is the personal history behind it. With that in mind, behind every great writer is...
...a giant monkey that taunts them and tells them that they will be forgotten if they ever get noticed at all. We all have something to say in this life and writers more than most. I think the thing that drives most writers is a fear of not being able to say it, not being able to put it the way that they want, or worst of all―of being misunderstood.

I remember when Rough Living first came out, there were a whole bunch of trolls who focused on a very small section of the book that deals with theft. My huge fear was that this would become a book that everyone thought was about stealing things. The fact is, I mention stealing only because it is one of the four ways to get something you need―and by the way, it's the most expensive way in terms of how much you end up paying psychologically and physically (especially if you get caught)―the other ways are far more effective. So yeah, that monkey is always there...taunting...

With that monkey always there taunting you, how much time do you spend writing?
I'm not one of those guys who is able to spend a specific amount of time writing each day. Living in Morocco, having a wife and a baby, being on the road a lot―it just doesn't work for me, no matter how hard I try. I write every day, but sometimes it's 15 minutes, sometimes it's a 15 hour stretch. It probably averages out to about two hours a day.

What makes this book special to you?
You won't find many books this honest. I'm not trying to bullshit people into buying a bugout vehicle or purchasing a windup radio. The point of Rough Living was to share what it takes to get by without most of what people think they need. I wasn't trying to lay out a blueprint, I wanted to show that it could be done. Life can be good even without all that stuff society has told you is required.

For me, this book was catharsis. I'm not Catholic or religious and the fact is that a lot of things I've done in life, I felt some guilt or shame over. In this book, I wrote about those things, put them out there, and cleaned my slate. It's rare to find a book this honest. My father disowned me over it and told me that I'd ruined the Damitio family name.

So writing this book, creating it and living it has had a personal affect on your life. In your opinion, what makes it different from other books in the genre?
Rough Living gets lumped in with budget travel books, but in fact, it's more of a survival manual for those who get knocked down and kicked by life. There's a lot of fear in the world and my intent was to show people that they don't need to be so afraid. Don't get me wrong, there is some great travel in this book―climbing the Great Wall of China, cultural encounters, and more―but the point is to show that life isn't really all about having a job, a house, a car, or a bank account. Rough Living is far more extreme than the happy backpacker guides it gets listed with.

So then, this book isn't for the happy backpacker or the traveler on a budget. Who is it for?
I wrote this book for Jane and Joe nine-to-five. I didn't write this book for travelers or even for people that are already living the rough life. I wrote this for the man or woman who is stuck in a job they hate, stuck in a life they hate―and who spend a significant part of every day being afraid they are going to lose that job or life. I'm not one of those guys who suggests that everyone quit their job and travel the world, I don't believe that. I just want people to realize that they can and will survive if things change. The tips are a way to provide people with a security blanket in case the absolute worst happens. The tales are a way of showing that when the worst happens, life can actually be pretty good!

If you were writing a manual for writers, the guy or gal who wants to be a professional writer, what advice would you give them?
We live in a time that offers mixed blessings to authors. On the one hand, there are more books being published than ever before. Through self publishing and print-on-demand, anyone can get their book out there. On the other hand, it's much harder to be noticed, to promote, and to make a living as an author.

My advice is to take the time to truly craft your writing. Attend writing workshops, join writers groups, and most of all, don't forget that the most important thing a writer can do is read. Read, read, read.

And that is good advice, advice that many authors have given and many more will give. You wrote Rough Living mainly from your own personal experiences. How have your experiences writing Rough Living changed you.
Absolutely. When I began the journey of Rough Living, I had no idea it would change my life to such a degree. At the time I wrote Rough Living, I'd only left North America once and that was a trip to the U.K. which lasted a bit less than three months. I was terrified when I opted to live without a job, without a house, without a clue of what would come next. You see, I was one of those 9-to-5ers.

Prior to Rough Living, I was living in Seattle, working for a dot-com, and terrified of what would happen if I lost my job. That was when the bubble burst. Rather than scrambling for a job like my friends were all doing, I decided to move towards what I was most scared of. I dove in. Since that time, I've never let a job hold me hostage again. As a result, I now live in North Africa, I'm my own boss, I travel to four or five new countries every year, I get invited to stay in five star resorts in the Mediterranean, and I'm married to a beautiful Arab woman and have a wonderful little daughter. Every aspect of my life has changed as a result of rough living.

Vago, I want to thank you for this interesting peek into your life, and for sharing it with our readers.

Be sure to read our complete review of Rough Living: Tips and Tales of a Vagabond."

Vago C. Damitio is a itinerant novelist, travel writer, social media geek, bumbling father, grumbling husband, and amateur anthropologist. He lives in North Africa but comes originally from the Pacific Northwest of the USA. His hometown is Kailua located on the island of Oahu. In his spare time, Vago travels, writes, takes photos, and plays with his infant daughter. All of his time is, in fact, spare time.

You can find more of Vago's books on Amazon.com